SHAWN JAMES AND THE SHAPESHIFTERS 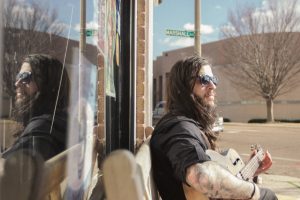 SHAWN JAMES AND THE SHAPESHIFTERS

He wears his influences on his sleeve explaining «where I grew up, on the South side of Chicago, and at my church, it was all about gospel and soul music. Artists like Son House, Robert Johnson, Otis Redding, Howlin’ Wolf. „I’ve always wanted to write and record an album of original music dedicated to that style. At the end of last year, I began writing and came up with nine dark blues, storytelling songs that I felt could pay homage to the greats. I booked Sun Studio in Memphis because of the vintage recording gear and rich musical history. I knocked out the tracking in just three hours.»

He describes the sound of the new album saying «you can find elements of haunting folk, dark raw blues, and powerful soul in my music. I feel like my solo material has a certain unique groove and sway to it similar to a lot of hip hop and rap artists I admire. I fuse elements of all kinds of music into something powerful, and I hope, unique.» «I’ve been singing since before I can remember,» James states, explaining how he cultivated his signature, vocal roar. «I grew up singing in gospel churches. It’s there that I really “cut my teeth” and learned how to harness my voice. Throughout middle school I was trained in opera, orchestra and choir. In high school, I started playing guitar, piano and trumpet as well.» Even though it seems obvious that his main instrument is his incredible voice it should be noted that he is also an accomplished guitarist (endorsed by esteemed Texas resonator guitar builder, Republic) as well being able to hold his own on kick drum and tambourine (as he does performing as a one-man-band) as well as on piano, trumpet, and musical saw».